When I describe myself as “submissive” I mean something rather specific: I mean that I really enjoy being conquered by a strong, masculine, dominant man, and being forced to surrender to him. But I don't just submit to a man if he is not able and willing to actually conquer me. I don't even quite know what that would mean. I find it hard to relate at all to the idea of submission without conquest. If the man is just going to sit there like a lump of jello and not actively dominate me, then why in the world would I submit to him? I might as well ‘submit’ to the sofa. That doesn't mean that I would always put up active physical resistance to the man's authority; it just means that he has to be willing to use his strength on a regular basis to physically reinforce and emphasize his dominance over me. I do enjoy play fighting, and if I didn't get ‘conquered’ at least a few times a week, then I'd start to wonder just who this guy thinks he is, trying to boss me around. Without some forceful physical conquest, I would just resent him giving me any orders.

The forceful conquest is what moves me into surrender and bliss. There's that sweet moment when my challenge and my resistance suddenly crumbles under the erotic thrill of fear and being overpowered; where I suddenly become incredibly weak and melt in a puddle of submissive desire. I guess maybe that's what swooning is. If so, it's a wonderful thing. :) But I couldn't begin to figure out how to melt into a puddle on my own. Nor would it be any fun, of course. That wouldn't be the same thing at all. The man has to learn how to make me do that. So “submissive” to me has more to do with how submissive I feel, and not so much to do with how readily I obey a man's commands. That latter criterion is what I might call “obedient” and I suppose I'm not really very obedient at all; unless the man brings that out as well. So I guess maybe the order that things go in for me is: Tension/challenge/resistance —> his physical force —> his conquest —> my surrender —> my submission —> my obedience. (But, of course, sex also fits in there somewhere too; at least sometimes.) Notice that in this Taken In Hand model of submission, the man is the one doing most of the work. Attaining conquest over a spirited woman is not an effortless thing. Whereas in another common view (I'll call it the “Lazy Boy” version of submission), all the man has to do is just say what he wants and then the woman does all the work of ‘serving’ him and catering to his whims; and that's considered ‘submission’. Umm, no thanks. 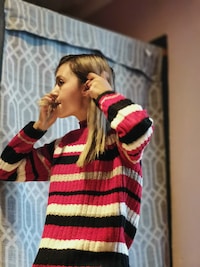 I, like you, like to be conquered. I will not submit to a man if he is not willing to show he is able to "make" me submit on a regular basis. I disagree with Pat; I do not think it is an unrealistic expectation. While she would tire of it, my husband thinks of it as a challenge. He does not think that being the dominant head of the household is more work at all. He does not see it as work that makes him tired. He loves that he has this intelligent, strong, woman who he can bring to submission when he wants. We play a lot too, and he is quite comfortable in his role to remind me of his dominance on a regular basis. I am not able to give my submission on a silver platter, so there is a challenge to keep it. My husband knows this about me, and he likes it. He says he can only conquer small parts of me for a short time. He would not want me to submit all the time anyway, where is the fun in that? There are men out there who would be willing to keep up with you. I do not think it is unrealistic at all to be looking for one. Although I am not sure how many of them there are out there, I doubt I have the only one, but if I do, sorry you can not have him! :)

About the math thing, I am better at strategy games than my husband far more competitive and he will take me in hand if I beat him too often. He is perfectly comfortable with me being better. He loses like a gentleman, but later he will show me that even if I am better at games, he can always put me in my place any time he wants. It is part of our dynamic, a wonderful spirited part that we would not give up for anything. I understand why you want it; it gives us some kind of balance. Makes us feel good. I understand how telling someone you want them to dominate you can take something away from it. I do not like to tell my husband I want or need a spanking. Somehow part of my pleasure (?) comes from him deciding and knowing to take me in hand. But at some point, this day in age, I expect that you will have to give the man explicit consent, no matter how dominant he may be. Every fiber in his being may want him to ravish you, but he may not do it unless he feels he has permission. In fact you may turn away a perfectly dominant man because he does not think you want to be dominated. I think it at some point it is up to the submissive partner to start the ball rolling. Give a man consent explicitly to be dominant, and you may be surprised that some seemingly non dominant man can be very dominant indeed. I think that while it is not impossible to find someone who will dominate you with implicit consent, most men want and need explicit consent for their own safety. They err on the side of caution, for very good reason they can go to jail, or unintentionally hurt someone, if they misjudge.

It never occurred to my husband to be dominant actually. We were married for 10 years and he was never very dominant. He is so dominant now, but it never occurred in his wildest dreams to be dominant with me. It was not the way he was brought up. Once I gave him permission it was like releasing a lion. He had pent up this dominant person, stifling himself actually. Rightly or wrongly there was a dominant man in my husband, but he never understood it. Well I guess it took me some years to know I was submissive! I was not brought up to be that way either! I just think that while you are waiting for a knight to happen by, a knight who does not know he is one, maybe closer than you think. I believe many men are far more dominant than they know. Sometimes we need to encourage them to get started, and then they can take off from there..

I think your first paragraph sums it up nicely. You want to be physically conquered on a regular basis, and forced into surrender. Hmmm... without putting to fine a point to it, I believe there is a word for men who beat their partners into submission on an ongoing basis, and as I recall, the word mentioned was not "dominant". Seriously, how do you expect someone to react to your demand of having to be physically forced to submit (though you were unclear what that means: spanking, whippings, hot wax, slaps across the face, cutting your flesh, being given over to the dogs, etc), or you consider him a wimp? Huh? When last I looked it was not the submissive partner's job to make demands, or to require their dominant partner to behave according to their wishes. In fact, why should he cater to your kink at all? Hey, if you don't like the way he treats you (or I suppose in this case doesn't treat you) you have a choice, you can leave. Or perhaps "forceful physical conquest" is a euphemistic term for having rough sex? You know, where he wants to fuck you, you say no, and then he does it anyway? Is that it? Does it gives you a charge since it almost feels like rape? I ask since you used the terms "fear" and "overpowered" to describe the sensations involved.